Rob Cruickshank 2004
Spiral Inscriber is a cybernetic painting. It takes a familiar shape: a rotating platter, and a pivoting stylus.
This form recurs many times in 20th century media, from the gramophone to the hard drive. It is now obsolete, and already seems quaint. In addition to exploring effects of visual perception, Spriral Inscriber is a celebration of, and a farewell to this form.

The platter is hand-painted with a phosphorescent pigment. The stylus is a near-ultraviolet LED, controlled by a servo motor. As the platter rotates, the stylus is moved across its face and illuminates, leaving a vivid, yet ephemeral trace. 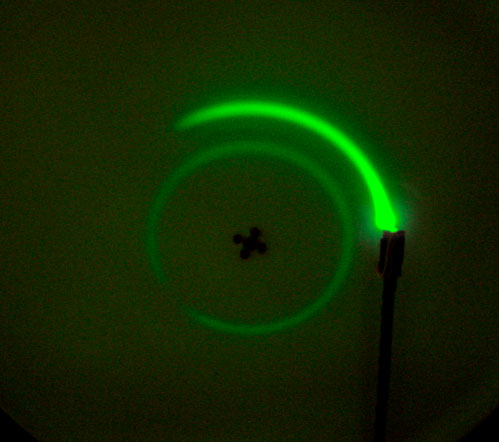 References in this piece to the kinetic work of Marcel Duchamp, analog oscilloscopes, Robert Smithson's Spiral Jetty, the paintings of Bridget Riley, radar screens, seisomographs, recording hygrometers, Danish Hi-Fi equipment, hypnosis, and nuclear radiation are intentional. References to ancient and mystical properties of spiral shapes, except wheras contained in the above, are accidental.